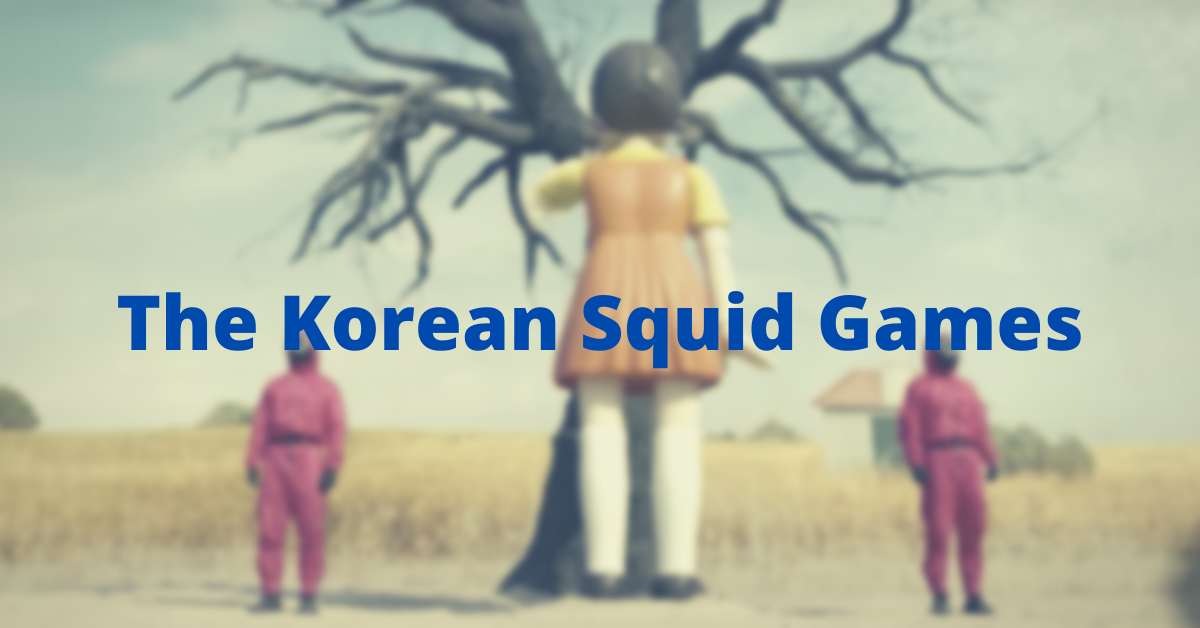 One of the latest K-dramas to be released, Squid Game (오징어 게임), has quickly become very popular all over the world and there’s not a single person who hasn’t heard of it. It’s a survival game set in Korea, in which people who are having financial problems in their lives and are desperate to try their luck in this deadly game. The last one alive will be able to take home a jackpot of 456 billion won (about $382 million). The Korean games you saw in Squid Game are based on children’s games that the participants have played during their childhood.

Let’s take a look at the games one by one.

In order to be recruited as participants in the game, the various characters are lured by a man in a suit (played by Gong Yoo) who promises them money if they win a game to be played spontaneously called ddakji (딱지). This involves flipping a square origami by throwing an identical one hard over it. In the drama, if you succeed, you get a 50,000 won note, while if you fail, you receive a slap on the face. At the end of the game, the Squid Game representative leaves a business card with a phone number to call to take part in the actual game.

In Korea, there is an equivalent to our one, two, three… star, only the phrase is 무궁화 꽃이 피었습니다 (mugunghwa kkotchi pieosseumnida), which literally means “the hibiscus flowers have bloomed”. The choice of the flower’s name is not accidental, as the hibiscus is the iconic flower of Korea.

In Squid Game this is the first game and the phrase is uttered by a giant doll dressed in yellow and orange which, when it turns, detects the movements of the players, who are then eliminated.

The doll, now recognized as a symbol of the series along with the red-clad masked men, has become so famous that a reproduction was recently installed in Seoul’s Olympic Park.

The second of the Korean games seen in Squid Game has been translated in English subtitles simply as ‘caramel’. It consists of peeling off small shapes from a circle of caramel, obviously without breaking them. This type of candy is called dalgona or bbopgi and is a cheap candy that is very popular among Korean children. It is frequently found at street food stalls, especially in the Myeongdong area. In the center of this circle of caramel, a shape is always found (in drama there is a star, circle, triangle or umbrella) and children like to compete to pull it off before eating it.

The third Squid Game is tug-of-war (줄다리기). It’s played in teams and the rules are no different to those we know, but in this episode we learn a strategy. You have to choose the leader well, who will be in front and closest to the opponents and will act as the soul of the team. The last person, on the other hand, must be someone strong and solid as a rock. As soon as the game starts, all you have to do is hold on so that you don’t get tired. On the contrary, you must wear out your opponents and once they show signs of giving up, you have to start pulling.

The fourth challenge is to play marbles (구슬). Before TV and video games, it was a popular game for children to play in the streets of the city, and there were several versions of it. As it is now an old game, younger participants are not familiar with the rules, and the setting recreated in Squid Game for this challenge is a hanok-style village with traditional Korean houses of the past.

The simplest version involves placing a number of marbles in your hand and letting your opponent guess whether it is an even number (짝수) or an odd number (홀수) and this is in fact the version most Squid Game couples play. Other versions involve throwing your marble further than your opponent or hitting a hole.

This episode also talks about gganbu (깐부), the best friend and playmate in the neighborhood with whom you share everything. In order to become gganbu, one seals the pact by making a gesture similar to our promise with the little finger, but the thumb is also added. The thumb is used to mimic the stamp you put on a contract to validate it.

The fifth Squid Game challenge is called 징검다리 건너기 (jinggeom dari geonneogi) and takes up a very simple game that involves crossing a stream by jumping on small stones and when they are put together, the stones will help you reach the other bank. The problem is that in this challenge, there is glass instead of stones, and if you put your foot on the most fragile one, you don’t fall into a stream but into the void, resulting in hitting your head on the floor and dying.

The last game, the decisive one that gives the series its name, is the squid game (오징어게임). At first glance, it looks very similar to our hopscotch, in that it involves jumping inside areas drawn on the ground with chalk. However, with a lot of imagination, this design is supposed to resemble a squid and the rules are different.

This game is played in two or two teams. One side is defending and starts inside the figure by moving on both legs. The attacking side starts on the circle at the top of the picture, which represents the head of the squid, and can only move on one leg outside the picture. However, if the attacker manages to cross the center line and reach the other side, he can get rid of the penalty and finally move on two legs. At that point, passing inside the playing field, he will have to return to the head of the squid to win. The defense must prevent this move by trying to push the attackers out of the field of play.

All of these challenges or games explain the Korean Squid Games that the participants of this survival had to undergo. What do you think? Let us know in the comments!

For more information and interesting facts about Korean culture, keep following the Go! Go! Hanguk blog and don’t hesitate to contact us about living and studying in Korea.

Tags: Culture, How to