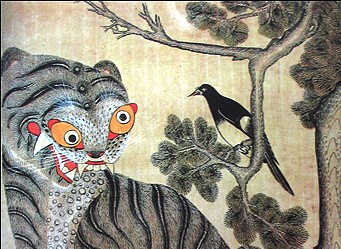 The tiger (호랑이, horang-i) plays a significant part in Korean culture. Historically, the tiger has been linked with Korea from the beginning. The tiger is strongly associated with Korean culture and is seen as representative to the identity of Koreans. Tigers in Korea are a symbol of strength and power and often seen as the guardian spirit and protector of the Korean people. Tigers are often featured in many Korean folktales and stories. Some people even comment that the Korean peninsula itself resembles a tiger waiting to pounce!

We can see the importance of the tiger in its selection as Korea’s mascot whenever they showcase the country on a worldwide scale. When Seoul hosted the 1988 Olympics ‘Hodori the tiger’ was a popular figure. The white tiger (백호 baek-ho) in particular is historically revered in Korean society and was used as the symbol for the 2018 Winter Olympics in Pyeongchang.

The tiger is a popular subject of art and paintings in Korea. Through these works you can see evidence of the tiger’s significance and sacred standing in Korean society throughout history.

Although occasional rumors persist about sightings of tigers in the DMZ (demilitarized zone) you will of course not encounter wild tigers in Korea today. However, in the past, tigers roamed freely around the Korean peninsula. Tigers coming down from the mountains were a very real and significant threat to people living in Korea. Naturally this has led to many tales giving various warnings and morals about interactions with tigers. It is in these stories that the tale of the tiger’s place in Korea has most been documented.

The tiger is so synonymously tied with Korea and its history that many folktales will begin with the phrase ‘호랑이 담배 피우던 시절’ (in the time when tigers smoked – a long long time ago).

It is often how animals are depicted in our children’s stories and folktales that stick with us the most. More so than other forms of media, these stories are remembered and passed down from generation to generation.

For example, those from the west usually base their judgement of an animal’s character from Aesop’s fables. The fox is crafty, the ant hardworking, the turtle does things slowly and carefully.

What of the tiger? Aesop and his counterparts in the west never really talked about such a creature. Tigers in Korean folktales are often the main characters. What characteristics does the tiger tend to display? Surely the tiger, being the symbol of Korea, is the hero of these stories and displays only positive attributes!

Actually, Tigers in Korean folktales are usually portrayed in a somewhat less than positive light! Naturally, the tiger is strong and ferocious, but in many Korean folk and children’s tales our dear tiger is also somewhat of a local fool! In a country that perhaps admires sharp thinking and guile over brute strength and power, our beloved tiger is often outwitted or is prone to making silly blunders. Perhaps the moral being that intelligence and approach is more important than size and strength.

Here is a summary of two of Korea’s most famous folktales involving tigers. From these stories you can clearly see the role a tiger often takes in Korean folklore.

It is said that Hwan-ung – the son of the lord of the heavens – came down to Earth in order to live amongst the humans. On his journeys he met a tiger and a bear who wanted to become humans. The two animals were set a trial in which they had to stay inside a cave for 100 days surviving only on mugwort and garlic. The bear was able to stand this test of patience and as a result was turned into a human lady whom Hwan-ung would marry. Subsequently the lady would  give birth to a son, Dangun. Dangun would go on to establish the first Kingdom of Korea in 2333BC and rule over it for centuries. The tiger meanwhile was left to roam as a tiger, scratching it’s head and wondering what went wrong.

This Korean folktale involves a tiger who comes hunting for food in a village. The tiger overhears a grandmother trying to calm her crying baby. She tells the baby that a tiger will come and eat it if it does not stop crying. Still the baby continues crying. At the mention of a dried persimmon the baby is pacified (wanting to eat the fruit). The tiger makes the mistaken assumption that the persimmon must therefore be more terrifying to the baby than a tiger. As soon as the mother mentioned the persimmon the baby was scared silent!  When a thief suddenly jumps on the tiger’s back it is convinced that the deadly dried persimmon has come to get him and runs away in fear.

There are many more stories involving tigers who get themselves in similar situations. As you can see, the tiger shares a somewhat dual honor of being revered whilst simultaneously being somewhat ridiculed as the victim of the jokes in Korea’s folk tales.

Despite this the tiger remains a beloved and important symbol of Korea. After all we always poke fun of those we love the most!